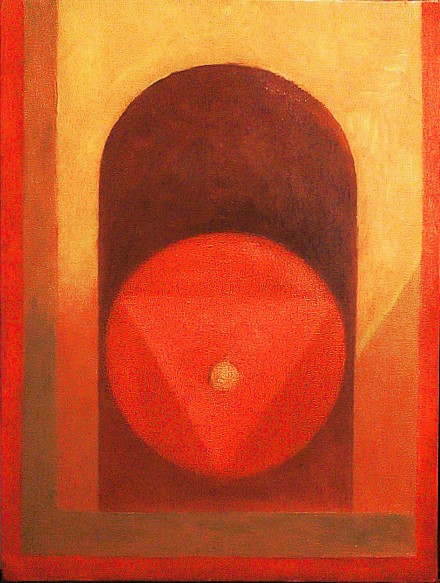 Working here with similar imagery or motif, but now instead with oil paint. It seems like such greater subtlety is possible with it rather than the acrylics, for me at least. Blending colors on the surface brings such subtle gradations and color. Of course it will take much longer for the painting to dry — a good thing while working and re-working it though. And it feels so nice working with the oil paint, and the smell… ah, it all seems so much more sensual. Marcel Duchamp famously criticized artists of his time for being “olfactory painters,” in that they were getting off on the fumes of their paints, in favor of more conceptual approaches to art. Well, Marcel, I honestly love the smell of oil paint and I say, bring it on!

And the question that arises is, whether this is ‘abstract’ work, with its emphasis on formal relationships and the media itself, or is it a more pictorial representation of an imaginary, perhaps archetypal space? Or is it a balance of the two? Perhaps, it is just painting, for its own sake.